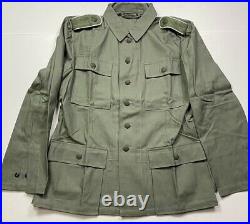 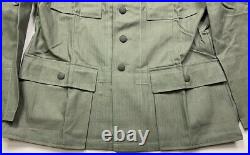 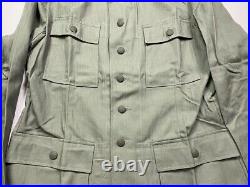 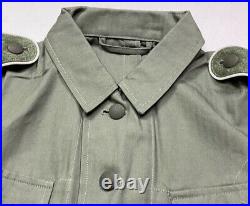 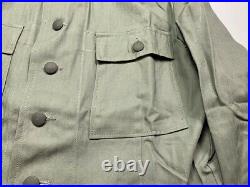 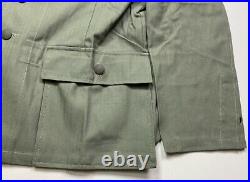 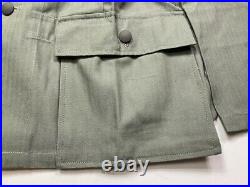 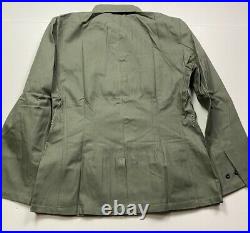 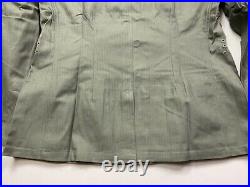 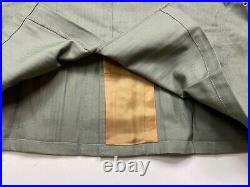 The M40 uniform was the first design change in the standard army uniform. It differed from the M36 only in the substitution of feldgrau for the bottle green collar and shoulder straps, which began to be phased out in 1938/39, though most combat examples show this variation appearing in 1940, hence the unofficial M40 pattern.

The troops liked the older green collars, and M40 (and later) tunics modified with salvaged M36 collars or bottle-green collar overlays are not uncommon. This was an unlined, insignia-less uniform made of linen or cotton herringbone twill (HBT) that typically had two buttonless patch pockets on the skirt; enlisted versions had a standing collar while NCO and officer versions had rise-and-fall collars. The fatigue uniform originally was undyed and therefore a colour that ranged from white to oatmeal to cement grey. On 12 February 1940 the colour was ordered changed to a bluish green called reed-green. Since the heavy wool feldgrau uniform proved to be oppressively hot in summer weather, especially in southerly latitudes, soldiers took to wearing their lightweight green fatigue uniforms in the heat. In about 1942 the Army regularized the practice: depots began issuing an official hot-weather four-pocket field uniform of feldbluse cut but made of the same reed-green HBT material. For the enlisted Heer, these were usually worn with collar insignia and national eagle. NCOs would typically wear the summer uniform (Sommerfeldanzug) with appropriate rank on their shoulder boards, but the collar braid seen on the wool uniforms was typically absent. Two models were approved for use in the Army, the first that was designed after the M40 feldbluse and a later model that removed the front pocket pleats and pocket flap scallops similar to the M43. From 1943 a double-breasted version based on the Panzerjacke was made for vehicle and assault gun crews.

Waffen units never had an official unique summer uniform, and while some used the Army versions, most used the earlier dyed work fatigues without insignia. While commissioned officers did have bespoke summer uniforms made, there was no regulation summer field uniform.

SHOULDER BOARDS NOT INCLUDED, ARE FOR DISPLAY ONLY! The item "WWII GERMAN HEER & WAFFEN M43 M1943 HBT SUMMER TUNIC- XLARGE 46R" is in sale since Friday, July 10, 2020. This item is in the category "Collectibles\Militaria\WW II (1939-45)\Reproductions\Germany". The seller is "luckyline1945" and is located in Pierre, South Dakota. This item can be shipped worldwide.
Home  Archives  Contact Form  Privacy Policies  Service Agreement