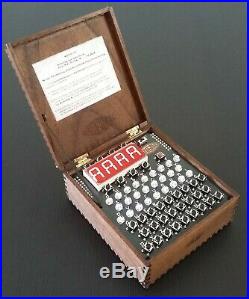 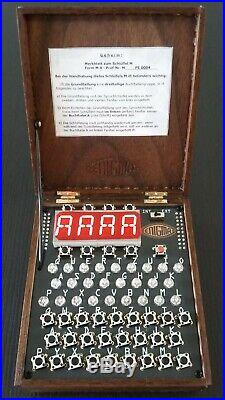 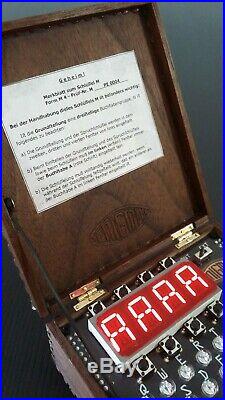 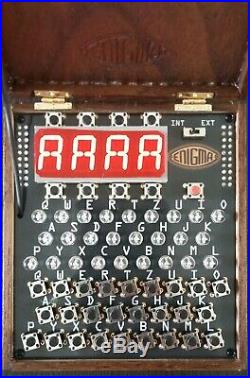 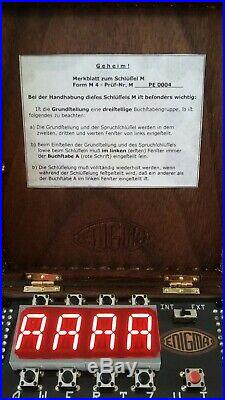 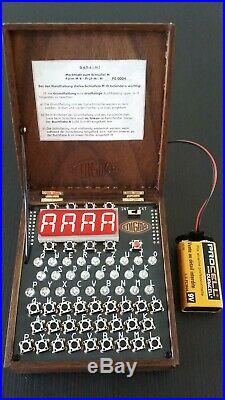 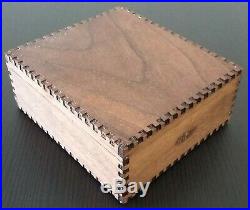 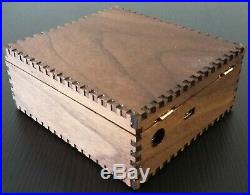 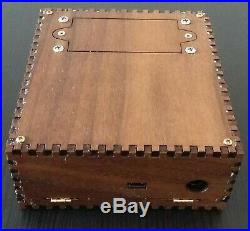 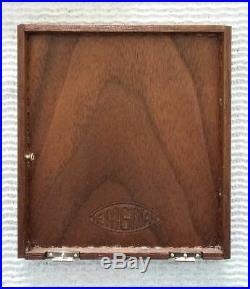 This is #PicoEnigma by [arduinoenigma] in a solid Walnut case. It is a very small, Arduino based Universal Enigma Machine Simulator that's open source and hackable. It simulates all well known enigma machines that have 26 keys.

There are a couple of oddball machines like the Swedish Enigma B A-133 and the Enigma Z30 that this does not simulate. For machines with a plugboard, one is emulated in software as well.

Once 10 plugs are set, an additional scrambler, a software emulation of the UHR switch can be enabled and set to any of its 40 positions. The accuracy of this simulator has been verified against Daniel Palloks Universal Enigma v2.5. The list of machines emulated is as follows.

Depending on the rotor position and the machine type, anywhere from 1 to 4 rotors will turn. For lever stepping machines, the double stepping anomaly is faithfully replicated and can be observed by setting the rotors to AADQ. Geared stepping machines and their more frequent irregular stepping are also simulated. Once a key is pressed and held down, the encoded result is shown in the lamp-field.

Because of the reflector, which sends back electricity through another set of rotor contacts, a letter can never encode to itself. This property was exploited by Bletchley Park to break the Enigma Cipher.

The following 3 behaviors were implemented in this simulator for that extra physical realism. They were verified with an actual Enigma Machine.

1 While a key is held down, the rotors can be manually moved forward by pressing the button under each rotor, and a new lamp corresponding to the result for the new rotor position and pressed key will illuminate in the lampfield, this may or may-not help in cryptanalysis of Enigma. If the stepping lever is not engaged, the left rotors can be moved backwards by pressing the button above the rotors. Since the stepping lever is always engaged in the rightmost rotor when a key is pressed down, the rotor can only be advanced, never moved back.

Once the middle rotors are in position after the double stepping anomaly has just occurred, they cannot be moved backwards either, only forward. 2 While a key is held down, a key from another row can be pressed as well and the result for the additional key will illuminate in the lamp fields. Due to limitations of the keyboard circuit, only one key per row can be pressed without distorting the position shown in the rotors. If a key encodes to a lamp in a different row and that key is pressed, both lamps are turned off, as the normally closed contacts in the keyboard are opened up, releasing either key illuminates one light in the lampfield.

For example, if pressing Y, illuminates G, while holding down Y, G is pressed, the G lamp turns off. If G is released, G illuminates. 3 Up to three keys (one in each row) can be pressed at the same time, one of the rotor change buttons can be pressed as well, the rotors will change and up to three lamps will illuminate. Pressing the red button enters the configuration menu.

Holding the red button for approximately two seconds performs an emergency zeroise of the machine configuration. Those settings are then saved to internal non-volatile memory. The machine can be identified as a glance as being in the configuration menu since multiple lamps in the lampfield will be illuminated without any keys being pressed. The illuminated letters will match the menu name, for the MACH menu, the M, A, C and H keys in the lampfield will be lit. The menu structure is as follows, the machine starts at AAAA in the encryption mode, pushing the red menu button once changes to MACH, the first level menus. Pushing the menu button changes between (AAAA, MACH, UKWD, ROTOR, RING, PLUG, UHR, V16). Once in a first level menu, pushing either of the rotor change buttons enters the second level menu and examines the current setting for that menu, pushing the red menu button again advances to the next first level menu without change. Pushing the rotor change buttons again while inside a menu, changes that setting. All of the settings can be changed in order, or one at a time.

Keyboard accelerators can be used in some of the submenus. For example, while inside the MACH menu, pushing N, instantly changes to the Norenigma machine.

The ukwd, ring and plug settings can be set with the up/down buttons or by typing them. Some of the menus, like UKWD and PLUG can be hidden if the currently selected machine did not have those features.

The last menu entry shows the software version running on the simulator (V16). If any of the rotor change buttons is pressed, the lamps are illuminated one at a time. Their brightness can be adjusted by pressing the rotor up/down keys. Once all the lamps are illuminated, pressing a key turns off the corresponding lamp. Pushing the menu button repeatedly exits to AAAA, the encoding mode.

The menu button is then disregarded for one second to prevent reentering the MACH menu accidentally. While going from V16 to AAAA to exit the menu, if any of the settings have been changed, the display blanks for a second while the machine configuration is saved to internal non-volatile memory (FLASH). The settings are saved in duplicate so in the unlikely event that the power cuts off during the write operation, the last known good settings can be recovered from the unaffected memory block. This device can be powered from an external battery (4-9V) through a standard Arduino center positive barrel jack, an internal 9V battery or through the exposed USB connector. The power switch is used to select between the internal and the external power sources.

To turn the unit off, select a power source that is not connected. The USB connector is unswitched and can be used to power up the unit indefinitely. A 9V battery lasts approximately 6 hours in standby mode.

The case is made from laser-cut 3mm solid Walnut. This device is hackable, want to turn it into a Akafugu word clock?

Weight (empty / with internal 9v battery): 188g / 234g. (lampfield and keyboard selftest/lampfield brightness adjustment). The front panel of this product is the actual Printed Circuit Board (PCB) to which all the components are mounted. As such, be careful with electrostatic discharges to any of the exposed contacts. I have not fried one yet and if careful, neither will you.

This is not a toy, but a delicate product, the hinges are nails are small, if treated with care, it will provide years of service. I still have simulators made in 2015 that work just fine.

This is a not a factory made product, it is hand-made and has its unique imperfections. You are getting the actual product shown in the pictures. Ships immediately anywhere in the world. Lastly: A lot of care went into making this. The item "Walnut case PicoEnigma An Arduino based tiny Universal Enigma Machine Simulator" is in sale since Monday, June 8, 2020.

This item is in the category "Collectibles\Militaria\WW II (1939-45)\Reproductions\Germany". The seller is "enigmaarduino" and is located in Hollywood, Florida. This item can be shipped worldwide.